A quick note today to reference this article on Reuters that quotes Elisabeth Brinton of AGL as noting that:

That’ a fair start on the 1000-battery Virtual Power Plant project in Adelaide, but not really a stellar take-up given the strong incentives being provided in the ARENA-funded project. 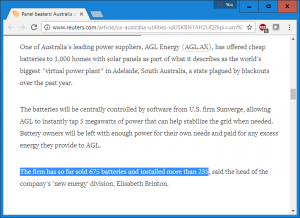 Earlier today AGL CEO, Andy Vesey, held a media conference for the launch of a $20 million Virtual Power Plant in SA which was jointly funded by AGL and the Federal Government. While the press conference made headlines for a…

On 20th September 2016, AGL Energy provided this 3 page submission to the COAG consultation process asking about both: 1)  The need for a central register of installed battery storage facilities; and 2)  A process by which it might be…