Coincidentally following close on my analysis of high Q2 2017 wholesale prices across all regions on WattClarity yesterday and the follow on coverage elsewhere,  it was very topical that the South Australian Government would award its much-talked-about 100MW battery project today, to Neoen and Tesla (to be constructed onsite at Hornsdale Wind Farm).

Amongst the reams of commentary about it, this particular comment from Warwick Johnston at SunWiz has caught my eye: 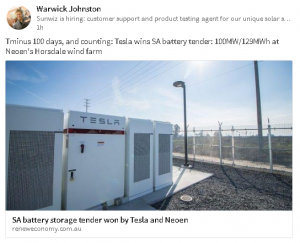 As I noted back in March, Elon Musk is (rightfully) seen as a Marketer Extraordinaire – hence I suspect that there will be many (including me) who watch with keen interest to see whether they can deliver on what they very publicly promised.

Personally, I will also watch with keener interest to see what emerges in terms of specifically which of South Australia’s problems this particular installation is being purchased to solve.

A big day today (Saturday 25th November), but worth a quick note here that the “biggest battery in the world” (at least for now) started up today.  Here’s a view from NEMreview v7 of how it charged this morning, and…