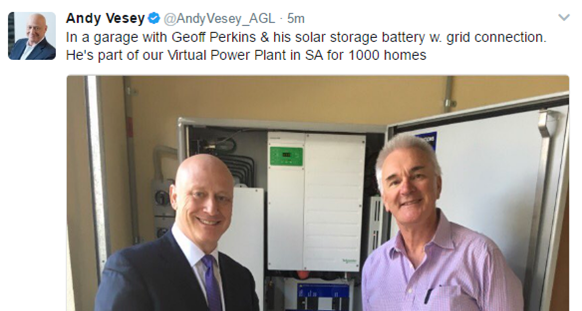 Earlier today AGL CEO, Andy Vesey, held a media conference for the launch of a $20 million Virtual Power Plant in SA which was jointly funded by AGL and the Federal Government. While the press conference made headlines for a public spat between the Federal Minister for Environment and Energy, Josh Frydenberg and SA Premier Jay Weatherill, it’s intention was to the promote the launch of the initiative which involves 1000 homes in the state. The event was held in the driveway of one of the participants, Geoff Perkins, who proudly had his Sunverge battery on display.

A quick note today to reference this article on Reuters that quotes Elisabeth Brinton of AGL as noting that: “The firm has so far sold 675 batteries and installed more than 235” That’ a fair start on the 1000-battery Virtual Power…