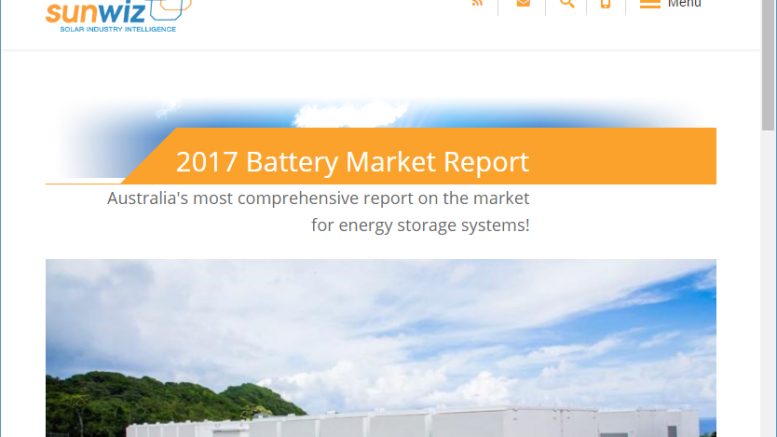 RenewEconomy reported today on new research that shows the uptake of batteries by households and business in Australia is anticipated to be at the same rate as solar.

In its 2017 Battery Market Report, released to RenewEconomy on Thursday, Australian solar consultancy SunWiz predicts a big year ahead for battery uptake, with market growth expected to treble over the next 12 months, after a 2016 that clocked up 6750 battery installations, or 52MWh – up from 500 in 2015.

The 2017 Battery Market Report by SunWiz notes that 5% of solar installations in 2016 included batteries.

… SunWiz expects the market to treble in 2017, to a point where 15 per cent of new solar installations will include energy storage. Of those households that already have solar, the report finds that a whopping 70 per cent have plans to add a battery or two.

To support the battery storage industry during this period of exceptional growth we are working to build the Energy Storage Register such that these instances of installed battery systems can be noted for the 4 reasons provided.

Checking in on previous forecasts about home battery storage uptake

Early last week we came across an article on the SolarQuotes.com.au blog which retrospectively looked at previous estimates on how the home battery market might look by 2020 and with permission we republished the article over to WattClarity where more…

On July 27th and 28th 2016, the Australian Clean Energy Summit was held in Sydney. On a first day session titled “Market Trends and Outlook”, the AEMO’s David Swift provided a presentation that is currently preserved on the AEMO website…